Born in Calgary, Alberta in 1953, the oldest of 3 children of Jack and Laura Williamson. My father started a drilling company involved in the seismic business in the late 50’s working in Alberta, British Columbia and Saskatchewan. I joined the company after attending the University of Calgary in the mid 70’s where we changed the focus of the company from seismic to mineral exploration and specialized drilling services for the Canadian Arctic.

Jack joined the Stampede City Gyro Club in the 70’s and I then became an older Gyrunt. I attended many Gyro bottle drives, president breakfasts and other family Gyro events. On the odd occasion I and other Gyrunts were pressed into service to retrieve our fathers from the Tradewinds Hotel where Gyro meetings would sometime start at lunch and carry on until late evening. Jack retired in 1988 and the drilling company was shut down.

During my work career for Flite Drilling Services, I travelled extensively from the Canadian Arctic, North West Territories, Yukon, British Columbia, Quebec and the Western United States. After the company was shut down I worked for a Calgary drill manufacturer as service manager. In 1994, I moved to Sacramento, California for an opportunity to be Manager of Western operations for a specialized drill contractor involved in the clean-up of American contaminated military bases. In 1995 an International drilling contractor based in Calgary with global operations hired me as their global logistics manager where I had the opportunity to travel and work in the United States, Venezuela, Bolivia, Mexico, South Africa and Madagascar.

In 2003 I started a company that designed, manufactured and operated sewage waste water systems for the oil field camps. The company was sold in 2006. In 2008 I became a contract logistics estimator for several engineering companies working on various pipelines in Western Canada, Alaska, Mexico and Peru. I retired – unwillingly – in 2016 when the pipeline work dried up.

Somewhere in all of the above in 1980, I met the love of my life at the Calgary Ski Club. Mina and I dated and then married on May 16, 1981. We have one daughter Erin who was born in August 1984 and is now a Chartered Accountant working in Calgary. We have one grand-dog and one grand-horse.

I joined the Stampede City Gyro Club in 1990 and held every position except treasurer a number of times. Mina and I have had the opportunity over the years to attend numerous District and International conventions and have made many new friends.

I am looking forward to serving District 8 as Governor and look forward to meeting more Gyro friends.

I was born in 1951, and grew up in Onoway, AB. My father owned a grocery store, and my mother was a nurse. I completed high school in Edmonton after our family, including one older sister, moved into the city in the summer of 1967.  I attended the University of Alberta, graduating with a Bachelor of Arts degree.  After gaining some work experience in the early 1970s in a variety of jobs in Edmonton, I joined the Royal Bank of Canada in August 1976.

I worked in several RBC branches in Edmonton from 1976-80 at which time I got transferred to Edson AB, where I joined my first service club, the Kinsmen Club of Edson. Over the next 16 years, I worked at several rural RBC branches throughout Alberta, and always volunteered my time in the community, whether it be with service clubs like Kinsmen or Lions, or as a volunteer with local minor hockey or the community golf club. I held various executive positions with those service clubs and community organizations over that time.

My passion for golf led to me joining the board of directors of the Alberta Golf Association in 1991 and I am still active with Alberta Golf to this day. I left the employ of RBC Financial in 1996 as Manager of the Evansburg AB branch to go to work with Parcom Marketing Inc. in Edmonton.  This new career involved various projects in the golf industry, including co-Publisher of The Alberta Golfer magazine for 26 years and as the Executive Director of the McLennan Ross Alberta Junior Golf Tour.

I first became aware of the Gyro Club of Edmonton in the summer of 2017 when invited to attend a Gyro corn roast by my good friend and former Edmonton Gyro president John Mann.  I joined the club officially that fall and was formally installed as a new member in January 2018.  I was invited to join the Board of the Gyro Club of Edmonton the following year as 2nd Vice-President and assumed the duties as club President in May 2021.

I have had limited experience to date with Gyro conventions, having only attended the district VIII convention that the Edmonton club hosted in Drumheller in 2019, but I was honoured to have helped coordinate efforts this past summer as our chapter celebrated its 100th anniversary with a spectacular gala dinner at the Fairmont Hotel Macdonald in Edmonton.

I am currently 70 years of age, and a confirmed bachelor! I have always had a passion for sports, both as a participant (primarily golf and curling), an eager fan of both the Oilers and the Dallas Cowboys, and as a weekend TV sports junkie. 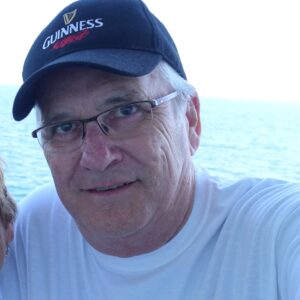 In 1978 I left the Canada Revenue Agency and started my own accounting practice. For the next 28 years I met and worked with many wonderful people. One of those people introduced me to Gyro Club of Calgary in 1995. I joined almost immediately. Probably the 2nd best thing that ever happened to me (see preceding paragraph)!

Since joining Gyro, I have served in Club as Treasurer and President. I have served District as the Governor in 2011-2012 and this will be my 4th term as your District Secretary Treasurer. Needless to say I am proud to be involved with our wonderful organization.

In 1996 we went to our 1st International Convention and we were hooked. Over the past 24 years Ann and I have attended many conventions, both District and International. We are truly blessed to have met so many people from across Canada and the United States that we are proud to call our friends.

Born and raised in Nova Scotia in 1944 and departed in 1964 to join the RCMP.  While training in Ottawa I met my wife Sharon and after transferring to British Columbia in 1966. Sharon and I married in 1970 and were immediately transferred to Prince Edward Island where we spent 3 years.  In 1973, we uprooted ourselves and were transferred to Saskatchewan where I was posted to our national training academy.  After a 3 year posting we relocated to British Columbia and spent the next 13 years in various locations prior to be transferred once again to Alberta.  After 7 years in the greater Edmonton area I was off to the best job ever – retirement after serving 32 years.

We added to our family tree in 1975 with our oldest son Shane and again in 1976 with the addition of our second son Scott.  We are the proud grandparents to twins – Sean and Avery who were added to the family tree in 2009.

Although I was acquainted to Gyro while in Port Alberni and Nelson, I did not have the opportunity to become a member until moving to Sherwood Park.  At the time I belonged to another service club and several members were members of Gyro upon which I became more interested and through my acquaintance with PDG Keith Bradley I eventually joined this happy group of gentlemen.

During my years with the Gyro Club of Sherwood Park, I have participated as Director, Vice President and eventually President in 2006-2007 and Secretary/Treasurer of District VIII under the guidance of PDG Bernie Kropp.

Since joining Gyro Sharon and I have enjoyed the benefits and friendship of our good Gyro’s.