Gyro Of The Year Award (The Norman L.“BUD” Mitchell)

The Gyro of the Year is awarded to a Gyro “for Extraordinary Service to the Gyro Fraternity in Club and District affairs ..in the Promotion of External and Internal Expansion ..in Recognition of the Unique Esteem he holds among fellow Gyros ..and for Exceptional Involvement in Community, Business or Governmental activities.”
This award was established in 1991 and named in recognition of Past International President Bud Mitchell. Bud was introduced to Gyro when very young. His parents Norman and Louise were very active in the Minneapolis Gyro Club for over 50 years. Educated at the University of Minnesota he joined the Marines and became a fighter pilot, thus he was ready when the war started. Following the war he became the chief pilot for the Minneapolis Star and Tribune for 25 years and then Vice President for 6 additional years.

Bud, while body surfing with his doctor in Hawaii in 1989, was struck by a rogue wave that slammed him down on the sand, resulting in a broken neck. He was thus paralyzed and spent the next 12 years surviving in a respirator. Overcoming his injuries to some degree, he was fitted with a computer and an air-driven keyboard by which means he continued to communicate to his friends and write about Gyro.

He was heavily vested in Veterans Affairs before his injury and continued to write and support veterans well after. At ceremonies in conjunction with a Veterans Day celebration in 2000, he was on stage to assist as his brother read the speech that Bud had prepared for the event, embraced within his respirator.

However, it is not only for his contributions as a war hero, his business success, or his service through all the echelons of Gyro, that the award bears his name. He truly exemplified the brotherhood of friendship – the tireless participation, the doing for others, and the out-stretched hand of friendship.

He was Gyro personified, and thus it is fitting that the following District VIII members have received this award:

The Honor Key is awarded to a Gyro “for distinguished and unselfish service over and above the call of duty, with such services thus bringing honor to, and respect for, our fraternity in the national & international field”.

It should be noted that service at the International level is not a prerequisite, but service to International is. This award is appropriate for the Gyro who 1) has given extensively of his time and talents supporting expansion efforts that transcend club and district boundaries, 2) continues to be a constant symbol throughout International of what Gyro spirit is or 3) by his extraordinary achievements and/or remarkable service outside of the Fraternity, that his association with Gyro brings honor and recognition to this organization. Any Gyro may nominate and submit supporting data and make recommendations to the Executive Council to support his nominee. If the nominee is approved by the Executive Council, the recommendation must be submitted to the Board of Governors for ratification.

The award itself consists of a plaque for hanging and a “key,” which is a replica of a Gyroscope complete with moving parts, to be worn by the recipient. When deceased, a recipient’s “key” is returned to Gyro Headquarters to be placed in a permanent display and identified by a silver name plate.

This award is considered to be the highest award that can be granted by Gyro International. To put it into perspective, it has been estimated that in the 100 years of Gyro’s existence, well over 20,000 men at some point have been members of our great Fraternity in 249 Clubs. There have been 160 Honor Keys presented in that period of time. Of those, 25 of the recipients are still living. Essentially all Past International Presidents have received the award.

Awarded Yearly for Contributing the Most to the External or Internal Expansion of Gyro.

Jimmie Hubbell, a charter member of the Cleveland Gyro Club when it was created in 1912, remained a staunch member of the fraternity all his life. It was Jimmie who offered the name for the club, based it has been assumed, on the steadfast position of that amazing device, the gyroscope, during the year.
Years later, in 1974, Jimmie, still thinking of Gyro, proposed a special recognition be given ear year to “deserving individuals” who contribute to the expansion of membership. In response, Gyro created the award named in his honor.ard (External or Internal Expansion)

The Edward “Ed” Steinbacher Lifetime Achievement Award which may be presented annyally at Convention “In Recognition of Extraordinary, Magnaminous and Perpetual Service to the Gyro Fraternity of Friendship”.

In 2005 the Executive Council of Gyro, in order to recognize the dedication of individuals, over an extended period of time to the cause of Gyro, decided to create a special award. They chose to title it the “Lifetime Achievement Award.” Gyro Ed Steinbacher, of the Gyro Club of Milwaukee, and Past District Governor of District II, had just died, and it seemed a perfect time to honor this man, who exemplified just the qualities they sought to recognize.

Nominations for this award are made by any Gyro Club, District or by Gyro International, and any Gyro can become a candidate. International officers review and consider all nominations and present the award or awards at the next annual convention. The award seeks to honor a member who has made significant recent contributions to Gyro and who has also given of his time over the course of at least twenty years. It is symbolized by a plaque given to the recipient, with his name prominently displayed thereon.

It is fitting that this award honors Gyro Ed Steinbacher. Ed was an involved member of his own club, serving as Club President and for many years as the Secretary/Treasurer. He was the recipient of the Gyro Award of Merit, the Honor Key, and the Gyro of the Year Award.

As Governor of District II, he also served as a valued member of the Gyro International Board of Governors. A retired Lt. Colonel in the Air Force and a veteran of World War II, Ed was active in his community and his church. He was affable, handsome, and erudite. Most of all, he was a leader and a tireless worker for Gyro. He was, in the words of a fellow Milwaukee Gyro “A man who lived to praise God, love his family, love his country and serve his fellow man.”

The Award of Merit 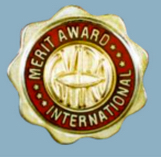 The Award of Merit is awarded to a gyro “for exceptional service to a club or district”.

The criteria for the Merit Award clearly establishes the value and honor that is being accorded the recipient. The award is unique in that it is not given to someone because they have done an exceptional job as a club or district officer – for it is anticipated within a brotherhood of friendship that any member is expected to do a good job in any office, whether appointed or elected, or when serving in any particular capacity.

Rather, this award is presented to the man who consistently renders exceptional service to his District, his Club and his fellow members without any thought of recognition or praise. The Award is given to a Gyro who has performed a task or service when not expected; a man, who day in and day out, serves as a reminder of what true Gyro spirit means; a man who is indeed special and has provided exceptional service.

This award is initiated by written application from a Club or a District Officer. All the Officers of the candidates District must then offer written approval of the request, whereupon it is then submitted to Gyro International, where it is then reviewed by the Executive Council for final approval or denial.

Considerable care is undertaken while under review to insure that the application meets the standards of the award criteria and to insure that the intent and honor that this award signifies is not diluted over time. In testimony to the award’s uniqueness, after 100 hundred years of Gyro fellowship, less than 4% of all Gyros have been so honored. Award recipients are noted elsewhere in this document within the lists of Governors of each district by an asterisk (*), or within separate district lists for those who have been so honoured without being a district officer.

John H. Harding Best Website Award John Harding was selected by the Executive Council of Gyro International to serve as the ninth Secretary-Treasurer of the Fraternity, starting in 1978. He served in that position continuously for thirteen years, retiring in June of 1991. At that time, he became the third longest-serving Secretary-Treasurer in Gyro history, only exceeded by founder Ed Kagy who served thirty years (1923-1953) and “Chick” St. Clair who served ?2007 twenty-two years (1954-1976). John was awarded the Honour Key upon retirement.

At the International Convention in Calgary in July 2006, a District Resolution advanced by the representatives of District I at the previous Interim Meeting was approved by the Board of Governors establishing a new award to recognize annually the Best Website amongst all Gyro clubs – use of the internet being thus acknowledged as an advanced method to communicate Gyro information and business to the members. The award was to be named after John Harding, recognizing his long service to the fraternity and to District I. The parameters leading to the award are similar to those used in judging bulletin awards –such as appearance, frequency of change and club, district and international information.

“The award is given to the best article printed in the GyroScope each year. It can touch on any aspect making GYRO a continuing success as George always wanted it to be.”
The man who became the associate editor of the GyroScope, first in 1980 and permanently in 1981, was a newspaper man by trade, but also a whole lot more as he went into printing and beyond.

George France was a bundle of energy and always interested in talking either politics or GYRO. He was active in politics up to the national level, enjoyed games, gardening, family and Christmas decorating. He taught Sunday School, traveled extensively with wife Peg was a Boy Scout Counselor, and a GYRO for over 30 years.

Some thought that the printing company was just George’s hobby while his other activities were what he was destined for. He could regale anyone for hours on the benefits of the proper candidate for a political office, or discuss the best way to approach a GYRO problem or program. As the driving force behind the GyroScope, George helped one and all to put together wonderful articles for the publication which may not have made great profit for his printing company, but made him feel proud of the work and of GYRO. He could take a mishmash of information and pictures and make a great story out of it.

Many a GYRO sat in the Frances’ upstairs memorabilia museum, or in George’s office to talk about politics or particularly GYRO. George always had some good advice which was given from the heart for the good of the cause. If the advice wasn’t followed, that was fine as there would always be another day to make suggestions as he learned from many years of political campaign.